Over a year ago I started a blog to record a specific project – a long overland journey – which didn’t come about. As a result I’m killing the blog off, but wanted to re-use the following post, because it’s a review of a book that I think is worth the consideration: 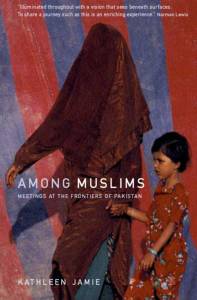 I saw a copy of Kathleen Jamie’s book Among Muslims in a secondhand bookshop a few weeks ago, thought ‘that looks interesting,’ but decided it didn’t look quite interesting enough to warrant adding yet another book to my overstuffed little house. But last week there it was again, in a charity shop, and I’d been wondering about the fact that Pakistan, a country I hadn’t really thought about travelling through, was on the Oz-Bus route.
This was very good luck on my part, because it’s a truly wonderful book. I’d never heard of Kathleen Jamie before, but her writing – as befits an award-winning poet – is clear, spare and, as a review in The Independent put it, ‘utterly luminous.’ Re-issued in 2002, ‘Among Muslims’ is primarily an observational account of time spent in Pakistan’s ‘Northern Areas,’ the region on the Pakistani side of the frontier with China, on the ‘Friendship Highway’ built between two wary states. Publishers Sort Of brought the book back out in the wake of 9/11 as a response to calls for accounts of encounters with Muslim communities which didn’t adopt the knee-jerk, closed-minded, Huntingtonesque, ‘us-and-them’ bigotry of many commentators at that point in time.
Jamie’s experiences – though ten years old by then – are a rich depiction of the advantages that women travellers can sometimes enjoy. On one hand, she has the role of ‘honorary man’ that Western women (those who dress respectfully, at least) are often given in Muslim cultures, so she can have long conversations about history or politics or religion with a retired Major in Gilgit or with an Ismaili in Hunza who wants her to bring him a copy of The Satanic Verses. But as a woman she is also welcomed into the female quarters of Shia families who keep purdah, and can present a rare picture of life there, too. Here she successfully treads a fine line; she doesn’t preach Western values at her hosts – either in person or through her later writings. Her scepticism is confined to her own personal reactions or to honesty about irritation with some of the more inflexible minds she encounters. But on the other hand she also quietly avoids becoming an apologist for any way of life, or complete cultural relativist:

“He asked what people always ask, about travelling alone. I told him I was torn between staying with Westerners, in purdah, safety and seclusion. I can’t fully denounce purdah because we do it ourselves, we go in gangs everywhere and keep ourselves separate, in a little cultural bubble.”

In the context of this [defunct travel blog], Jamie’s accounts of some of her travel experiences are worth noting. Many of the roads, even those between the larger towns she visited, are frequently blocked by landslips as well as – in the foreword to the new edition – the Taliban (according to the BBC – “but I didn’t believe it.” Quite). On the border crossing between China and Pakistan she describes how:

“There is no love lost between the peoples who together built the ‘Friendship Highway.’ Then it was decided that to be rid of us was the better option, and with infinite slowness the bus made its way out of Pirali and up towards the watershed. The Pakistani lads – and they were all lads – banged on the windows and jeered.”

The bus which carries not just spare tyres but an entire replacement gearbox in case the current one packs up on the high mountain roads is also a salutary reminder of the unpredictability of travel. But on the other hand, Jamie also has the best description of the ache of wanderlust which I think I’ve ever seen:

“I could picture so clearly the flower gardens and the sparkling irrigation streams, the deep shadows cast by a relentless sun. For months my stomach had been clenched against the cold, and if I went into the Pakistani shop on our corner, the smell of spices intoxicated me.”

Some of Jamie’s observations about the impacts of tourism on the communities she visits are also highly pertinent, especially bearing in mind that she’s describing events of twenty years ago and so the roads pushing their way through the mountain villages have probably changed the landscape and lives forever, and the organised groups of mountaineers who leave plastic bottles along their route and camp in village graveyards to avoid fellow tourists in the camp site have probably multiplied. Countering the arrogance of Westerners who argue that tourists can spread ‘democratic values,’ she warns of the effects of tourism in villages where women are kept behind even more firmly closed doors by menfolk scandalised by the behaviour and immodest clothing of hikers. But while she laments the effects of increasing traveller incursions, she also allows a voice to those who welcome the idea of tourist dollars:

“I thought: There’ll be a funicular railway here one day soon, like Scarborough. You don’t need a seer to tell you that.
‘Haven’t you enough? It’s like Switzerland.’
‘USA, Saudi have! Why not Hunza people? Hotel-building is self-help. We need money.’
‘And if you make a lot of money, Ghulam, what would you do with it?’
‘I would go to Karachi, maybe Europe, to get treatment for my arm.’”

(Delilah seems to have liked it as well, although for different reasons)